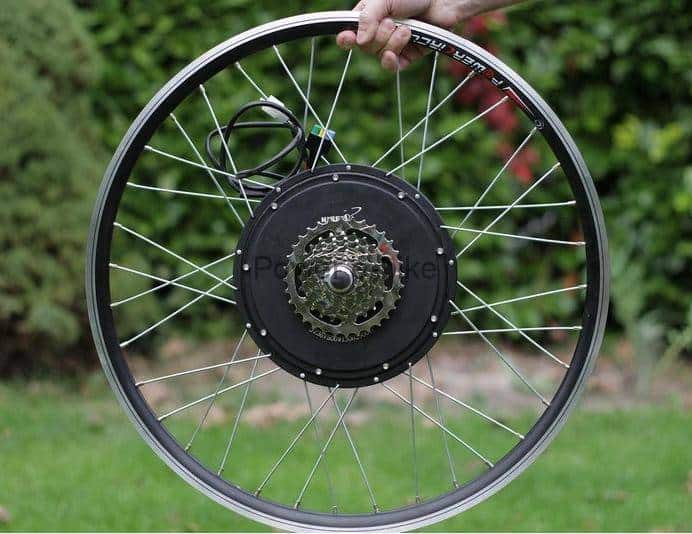 Alain already had a Rockrider 6.3 on which was installed a Bafang motor 8FUN front.
For several reasons (precarious traction on gravel, planetary nylon etc ...) Alain decided to change his bike with the aim of assembling a Nine Continent RH205 engine and Rockrider 6.3.
In the following lines chronicle the installation will be found.

Order placed on Monday, engine delivered three days later with receiving several emails + SMS from Power -e-bike to inform the various statutes of the order. Nothing to add, except that for a price equivalent to what can be found in China, it is provided by a French legal structure capable of ensuring the warranty.

open cardboard we have a few seconds to do the inventory. A cardboard box (not visible in the picture) contains the controller, the half-throttle grip and connectors.
The wheel motor is "splendid" as long as you appreciate that kind of beauty. Nine Continent marking is present on the flange and a paper label indicates the winding.
The updated engine offers big RH205C rays "12G" (2mm instead of 1.8mm or 13G) visibly larger than the previous, shelving "double-cross" is classic, and you can see now the Anderson connectors for motor phases. Also note the new output cable which is located in the hub whereas previously the output was at the end of the motor shaft with a higher risk of tearing. Leaving the wheel and returning, we can see that the DNP freewheel has been installed (optional). This piece allows for the smallest sprocket 11 teeth, which can accompany the engine when driving at 40km / h. With a classic mountain bike freewheel 14 teeth or more, "pedal in semolina" high speed, it is going too fast to accompany the engine.
Attention to file a freewheel on the motor, it is imperative to have the suitable special tool (the one sold by Decathlon is too narrow to let the spindle motor. The motor supplier offers this tool. In the box there is also the controller has selected Alain his order: And a few connections (and a wedge of which we will see the utility later) and half throttle grip: And presto, the Rockrider 6.3 is positioned to accommodate the motor-wheel: We spend a very light touch of lime in the fork beaks to remove paint overlay to easily position the axis of the engine: We will unscrew some screws to install the brake disc on the Nine Continent RH205C motor winding 7 * 9: The disc is positioned one begins to tighten: A small detail of the double walled rim and departure of 2mm spokes: By installing the wheel, it is found that the disc touches a little, a decision is made to machine a small tab (Unnecessarily, as we will see later) : The lug is machined, it will allow to shift 1mm stirrups to be in front of the disc: the wheel is positioned on the bike: The freewheel runs just is the millimeter, but it's good ... By fixing the wheel, alas, the wheel stops turning! It's nothing, just oblivion position the small wedge: Veiled in place, we will be able to close: But suddenly, with the hold up, the brake disc is shifted: the small workpiece is too much, it was not necessary. It is removed and everything falls into place as if the association Nine Continent RH205 et Rockrider 6.3 was defined from the start! Head to the skate park, we'll take some pictures in the gray autumn light and wind that sweeps the leaves.
The wedding Nine Continent RH205 et Rockrider 6.3 seems successful, the bike is great fun to drive:
The feeling compared to the version with front-engine 8FUN: Warning: under the effect of significant weight, the wheel spokes can relax after a few kilometers away: they will be to check and if necessary tighten with a radius key (¼ turn) 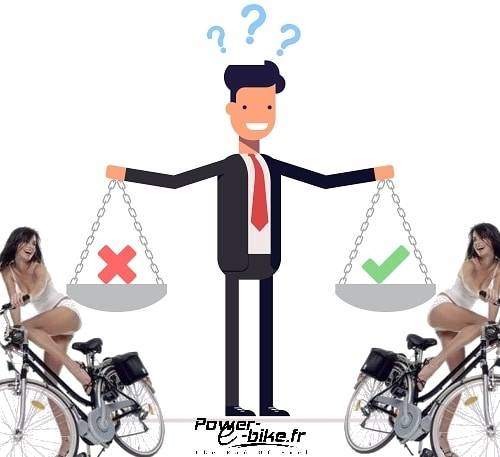 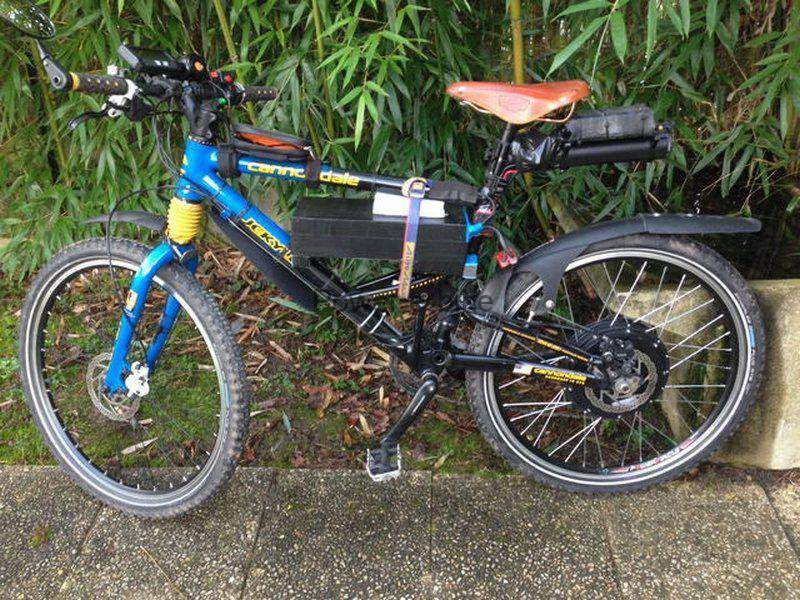